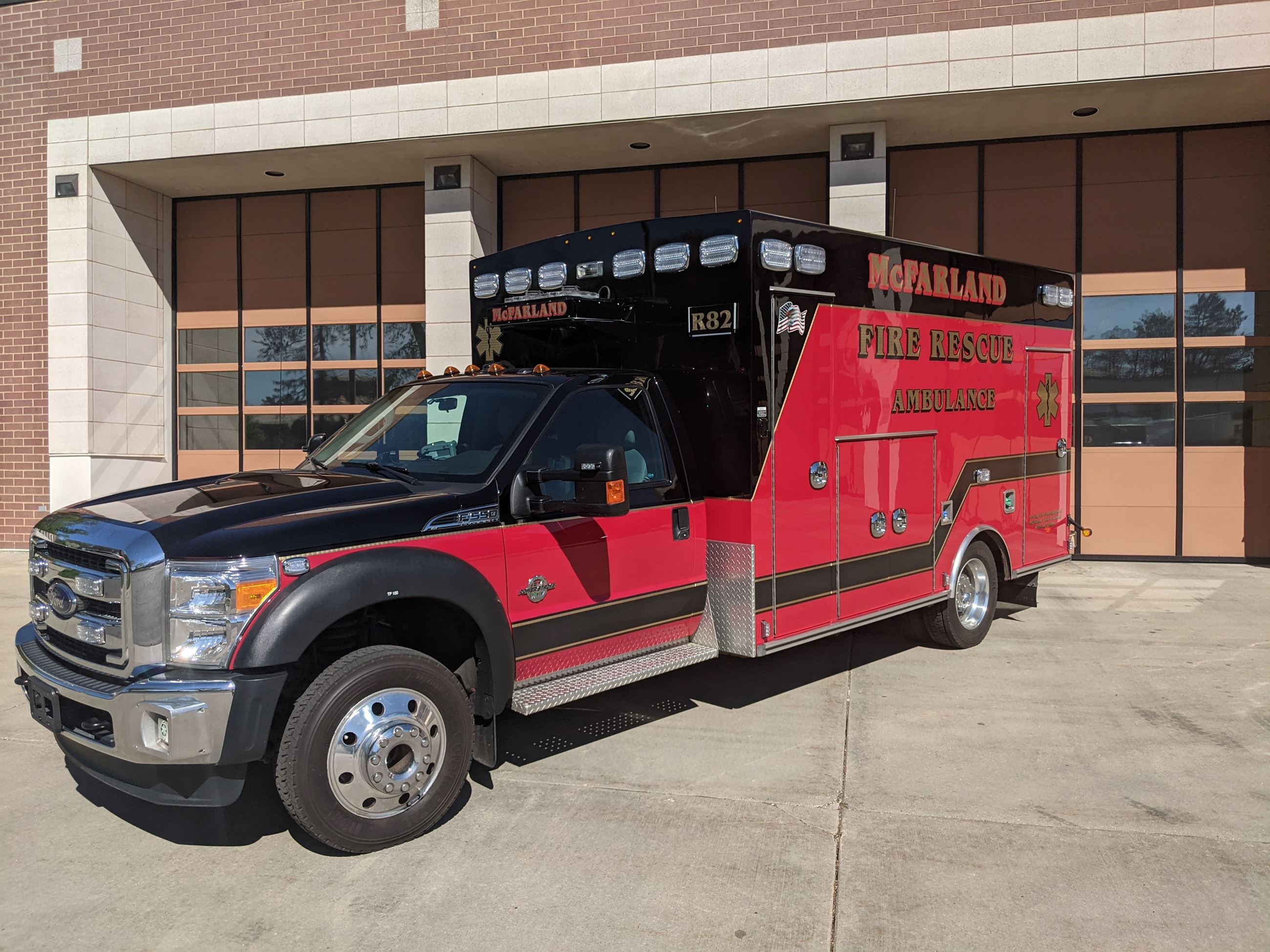 The 2019 Ambulance is Ford F-550 LifeLine Superliner. The ambulance is our primary ambulance and is most often operating with the call sign Rescue 84. The truck is provided with Liquid Spring suspension on all four corners to the most comfortable ride for the patients we can find. 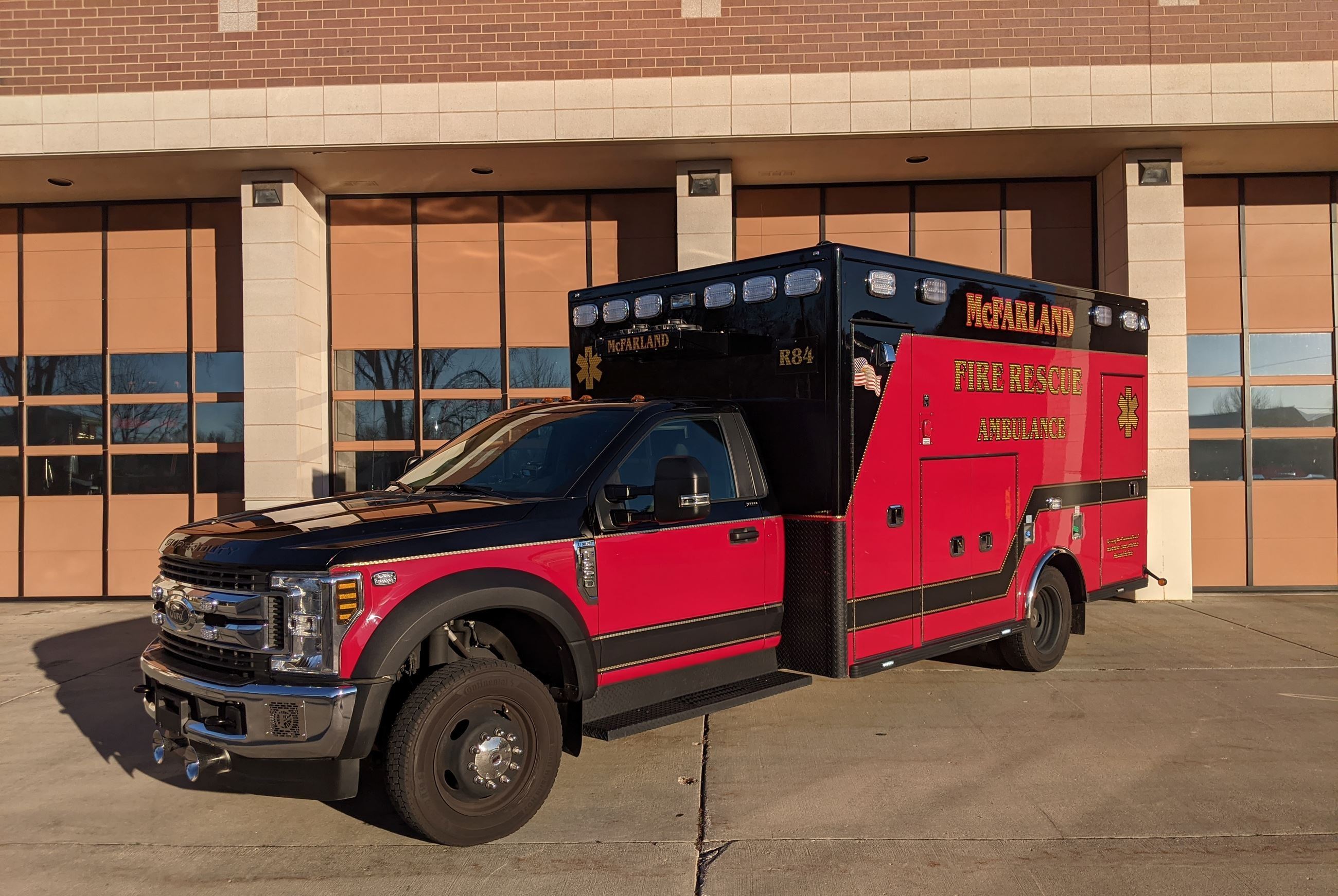 All Terrain Vehicle (ATV) 11 is a 2004 Argo extreme-terrain vehicle (XTV) that provides transport for personnel, patients, and equipment for ice recuses, brush fires, and other off-road scenes.

This vehicle can drive on both land and water and is housed on a trailer in the Fire and Rescue Department. 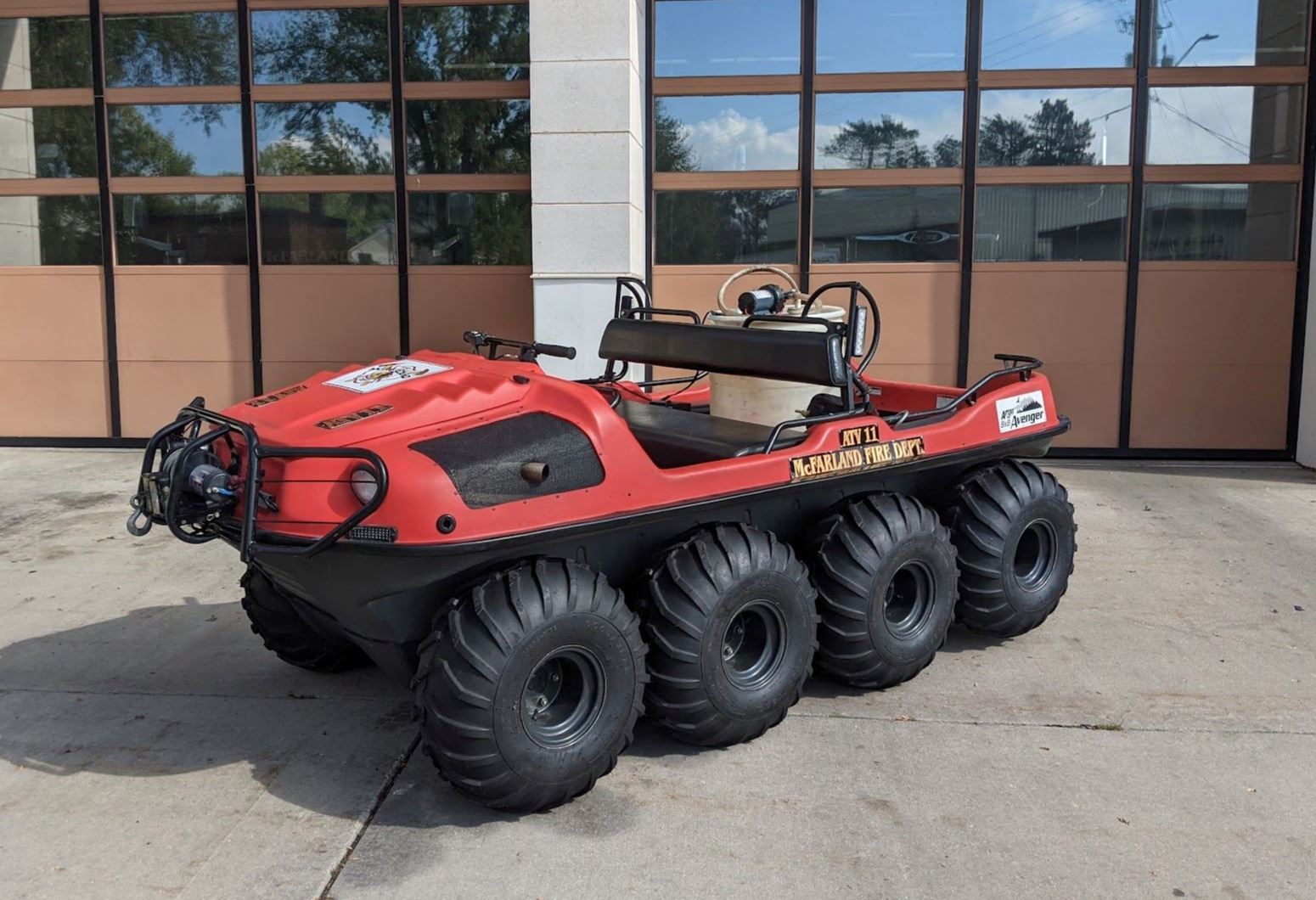 This XTV has 8 wheels and is able to carry 6 people on land and 4 on water, turn on its own radius, and climb out of ice.

Brush 9 is a 1996 Chevrolet 3500 pickup truck, built by members of McFarland Fire and Rescue, that is equipped with a custom brush fire skid unit that allows it to be the primary response vehicle for grass, brush, or wild land fires. 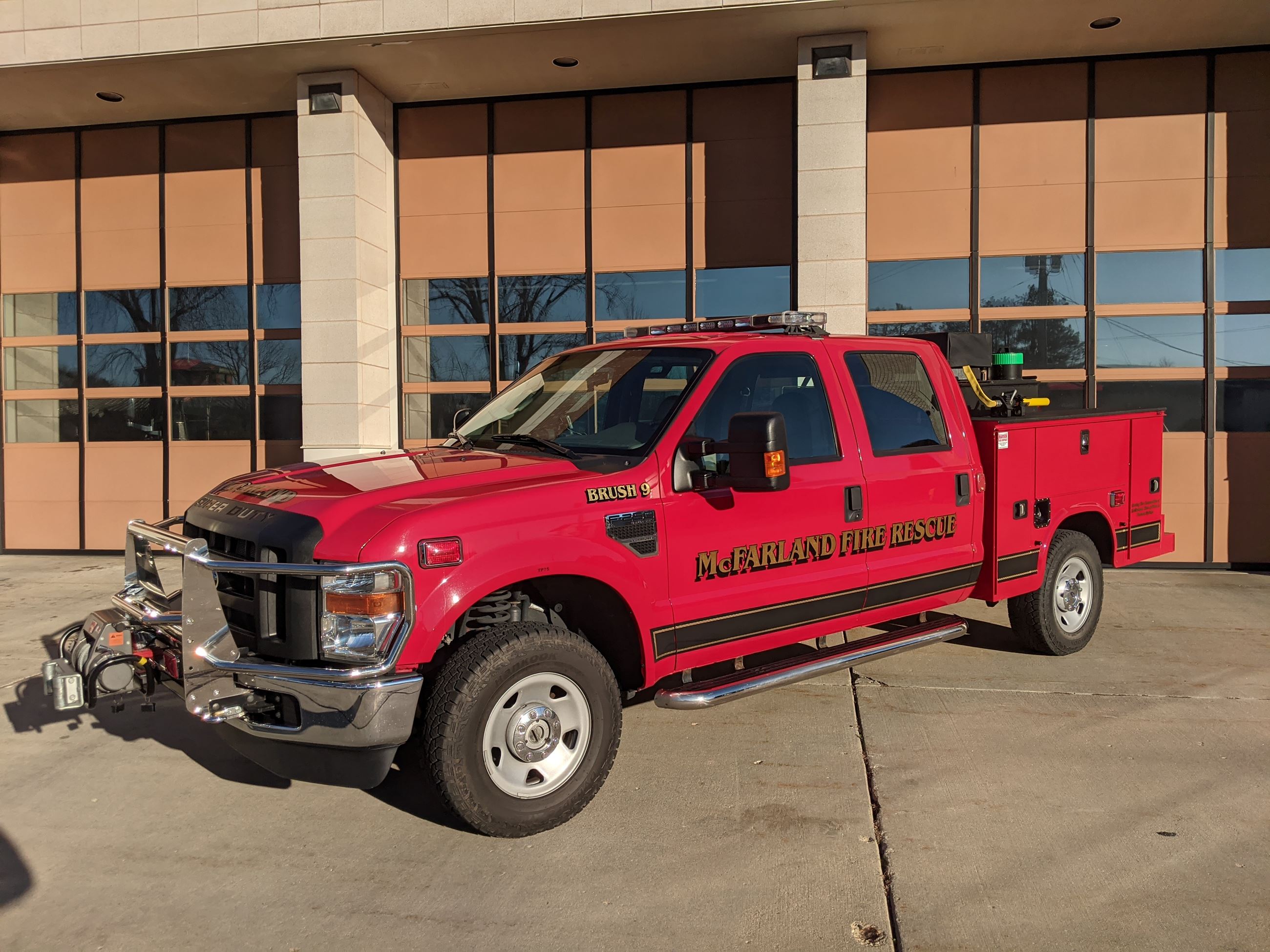 Brush 9 features a tank capable of carrying 250 gallons of water, a 250 gallons-per-minute pump, and various tools and hoses that help it to combat brush fires.

Car 1 is a 2012 Chevrolet 2500 Suburban that acts as a command vehicle during incidents and is used by the Fire Inspector to complete fire prevention inspections. It is also used to tow both Watercraft 10 and ATV 11. 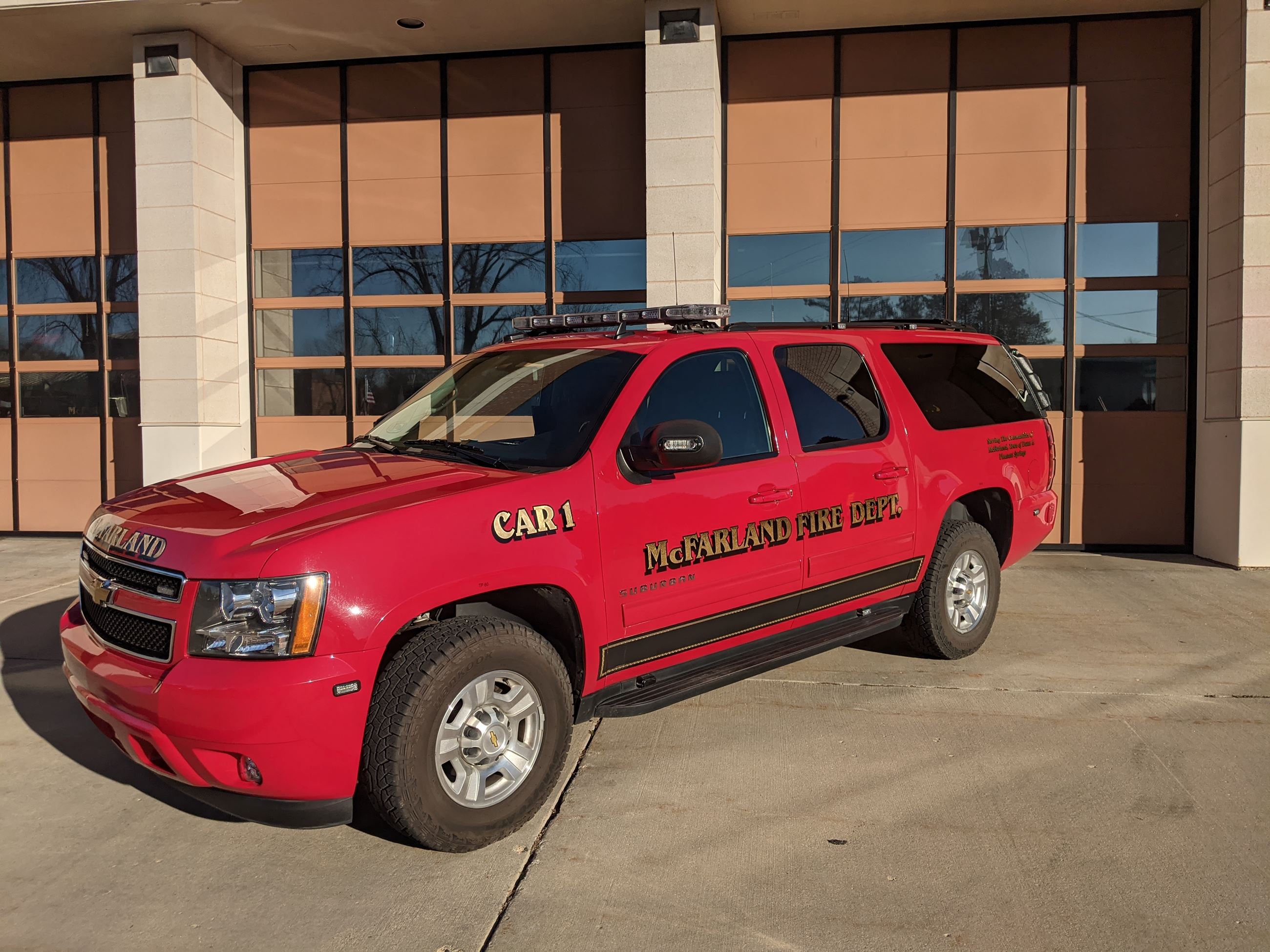 Car 2 is a Ford F-250 V10 Crew Cab which is primarily used to tow ATV 11 or Watercraft 10, but also occasionally used for external trainings or classes. 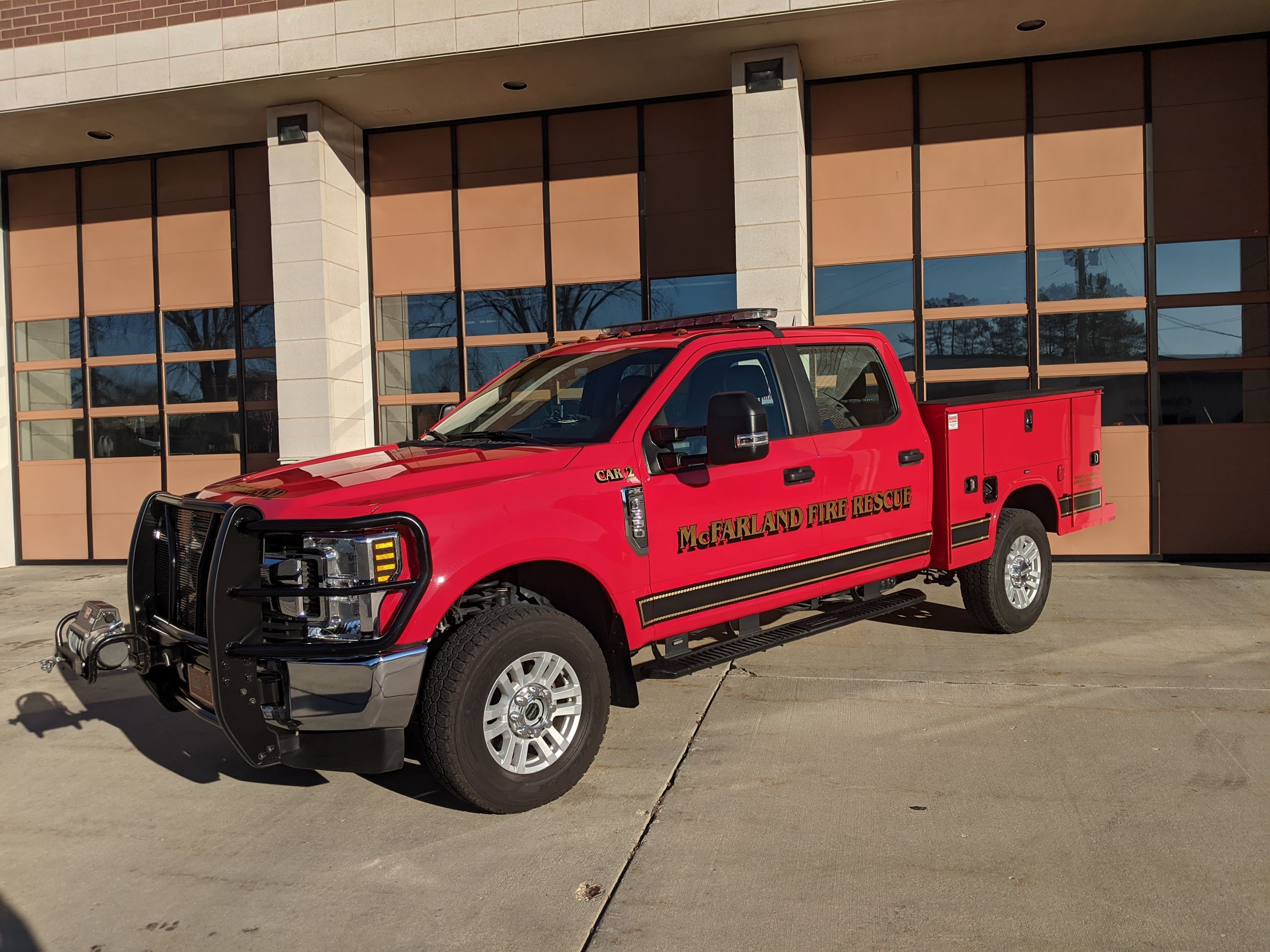 Car 3 is a 2016 Police Interceptor which is used as the take home vehicle for the Fire and Rescue Chief, an inspection vehicle, and for members to take to classes. 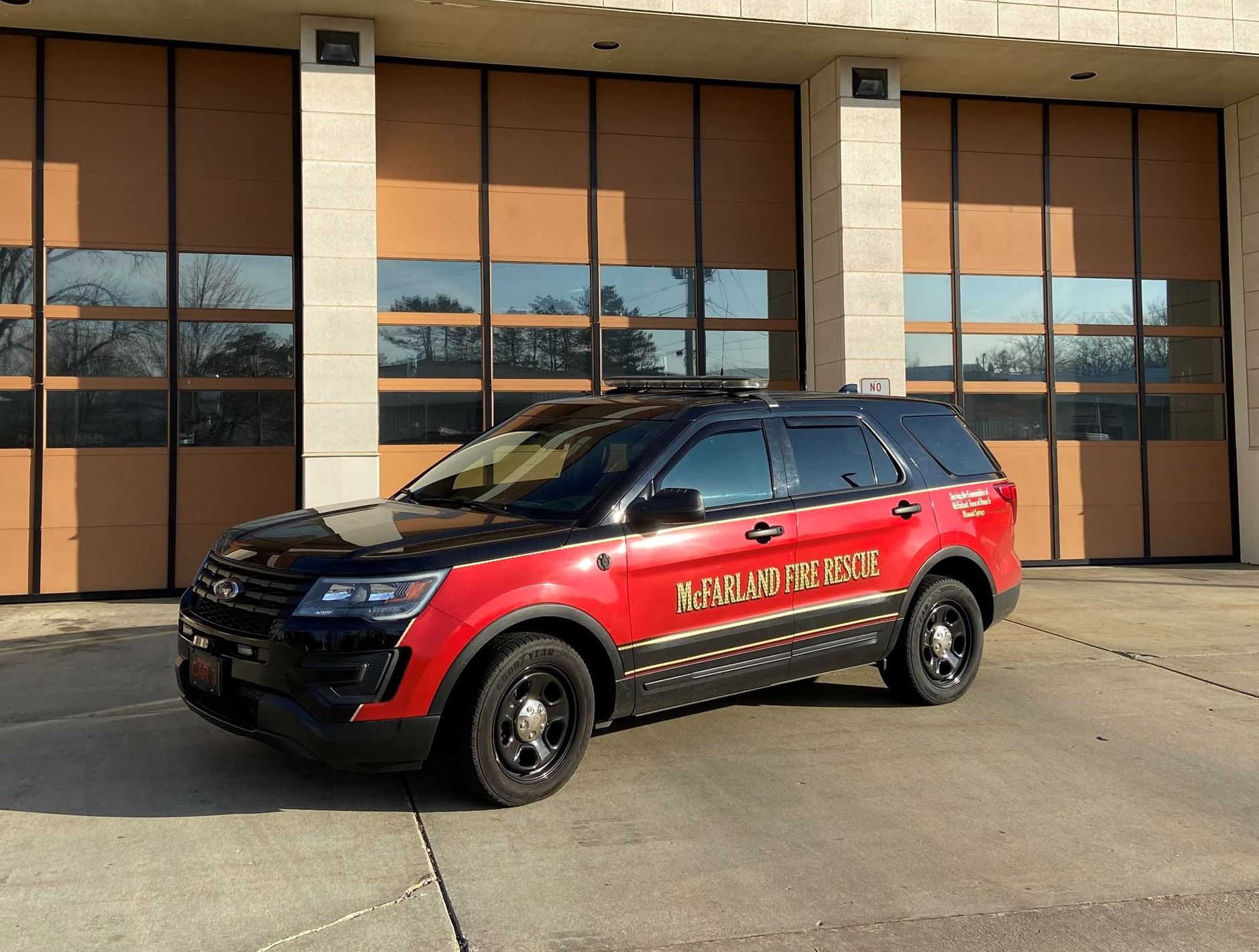 Car 4 is a 2016 Police Interceptor that is shared amongst all Village departments, but maintained by the Fire and Rescue Department. It has various duties depending on the department utilizing it, but is most frequently used for distant classes, trainings, and events. 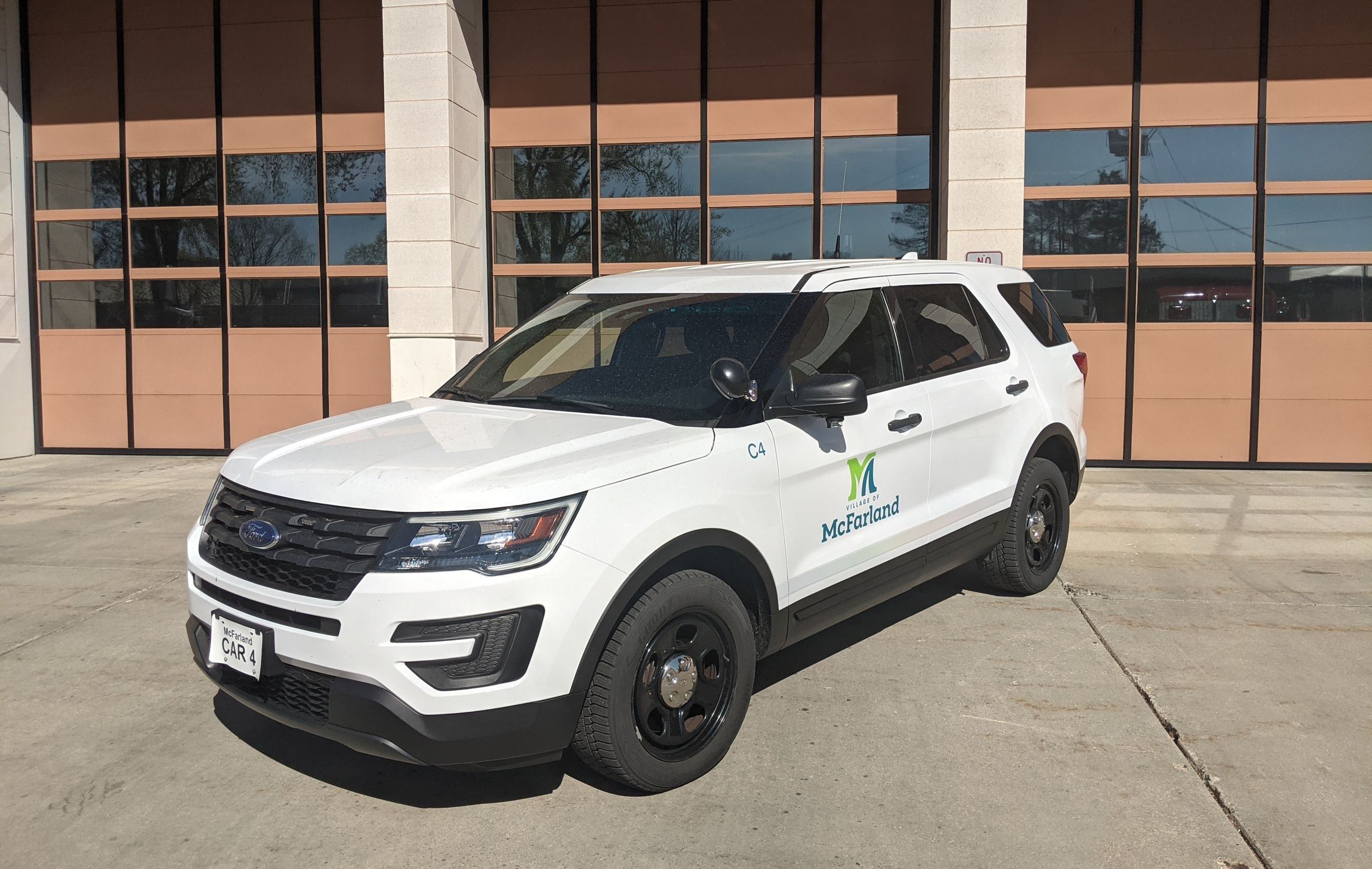 Engine 1 is a 2005 Pierce Quantum Engine and is the second engine to respond to fire, emergency medical, and lift-assist calls. 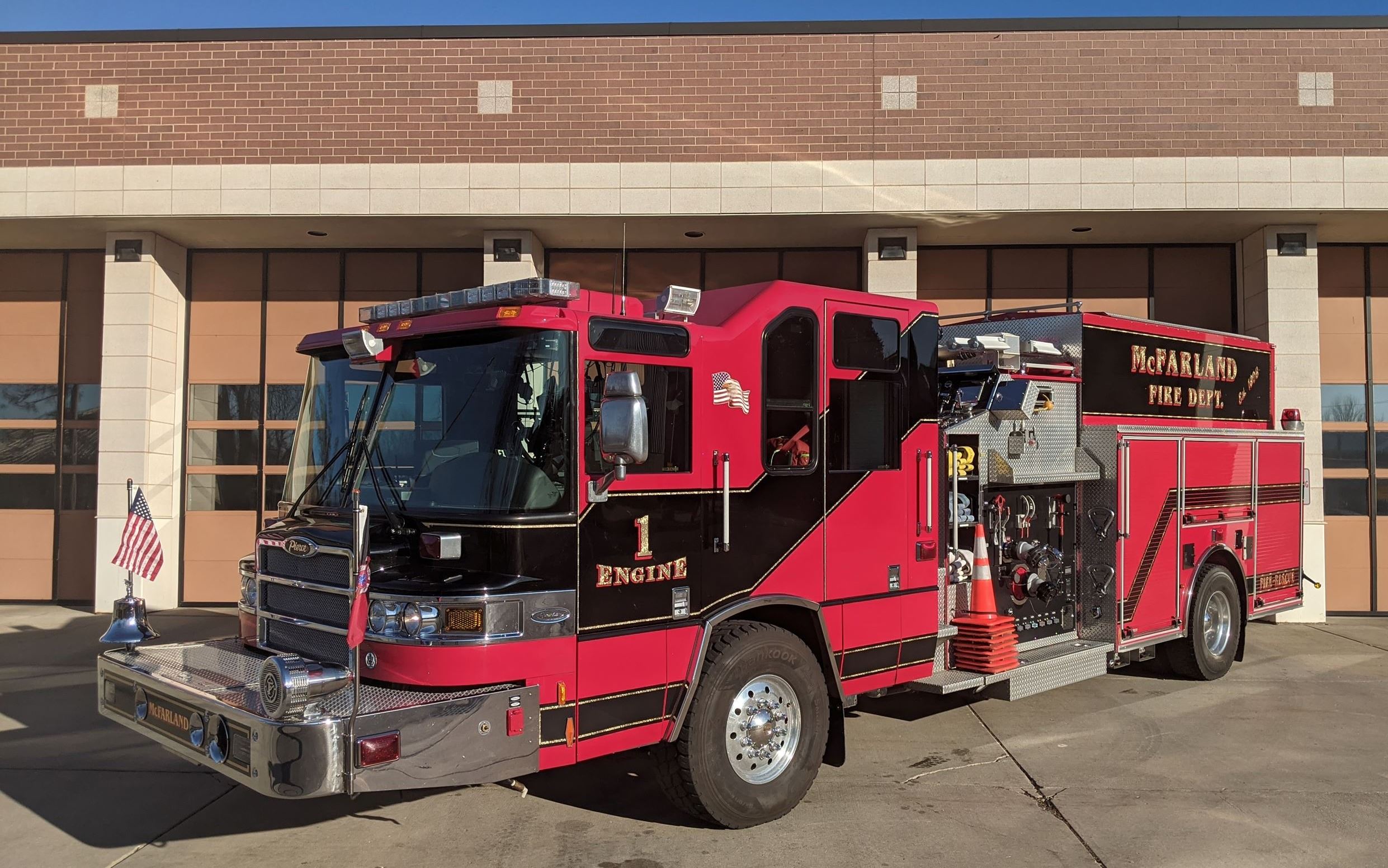 This engine is equipped with:

After over a decade of planning, the exciting delivery of this engine, in combination with Engine 1, allowed the Department to eliminate a 2,000 gallon Tender from the fleet. 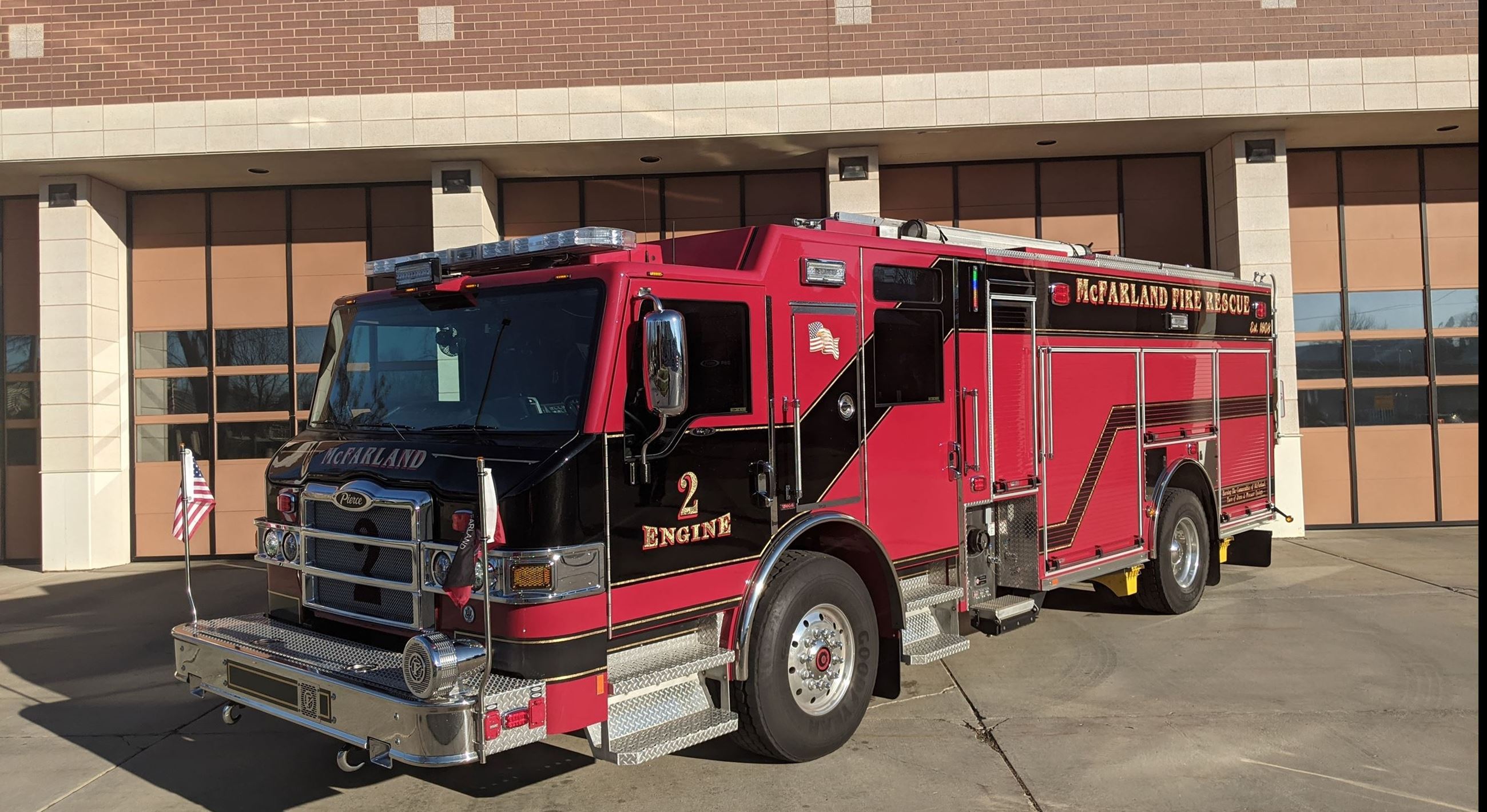 This engine is one of the most versatile pieces of equipment in the Department, complete with: 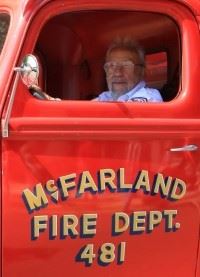 Engine 481 is a 1942 Ford that was originally purchased by the United States Army Air Corps and was used at Truax Field in Madison, Wisconsin. In October of 1947, the McFarland Fire Department purchased the truck to replace a 1924 chemical engine; the original shipping bill is on display in the Fire and Rescue Training Room.

Engine 481 was the first and only pumper in the Department until a Mack Pierce Engine with a 750 gallons-per-minute pump, known as Engine 482, was added in July of 1961 followed by a Ford Peter Pirsch Engine in 1972.

Engine 481 was retired in 1982 after over 35 years of service when the Department purchased a Mack Pierce Engine known as Engine 484. Engine 481 is not only the oldest vehicle of the fleet, but it is also the only vehicle in service for McFarland Fire Department for over 35 years.

Engine 481 features a tank capable of carrying 175 gallons of water and a 500 gallons-per-minute Barton front-mounted pump. 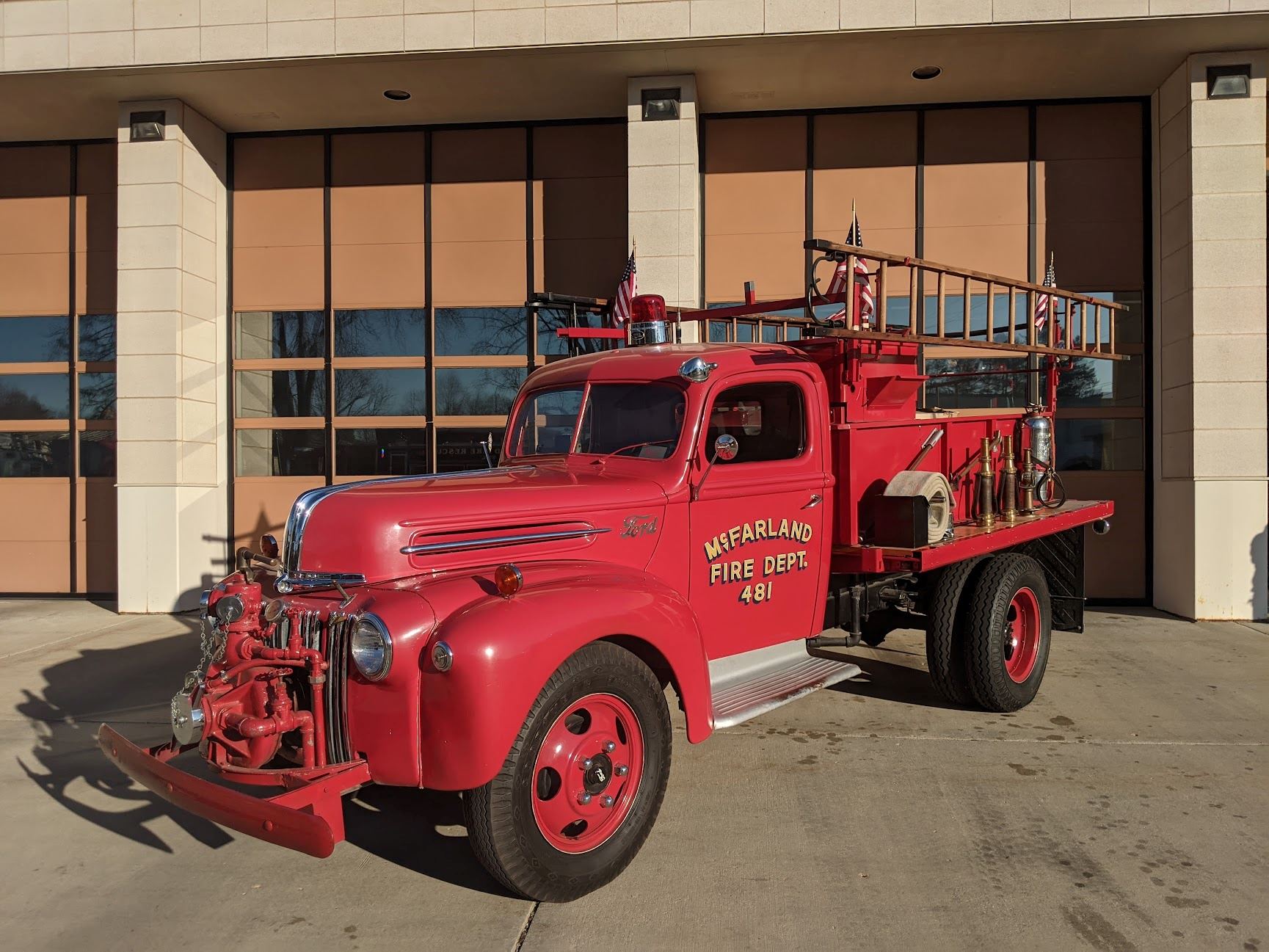 Ladder 8 is a 1997 Pierce Arrow Quint with a ladder measuring 105 feet in length which can be used to reach large or elevated fires as well as evacuate civilians from the upper stories of buildings. 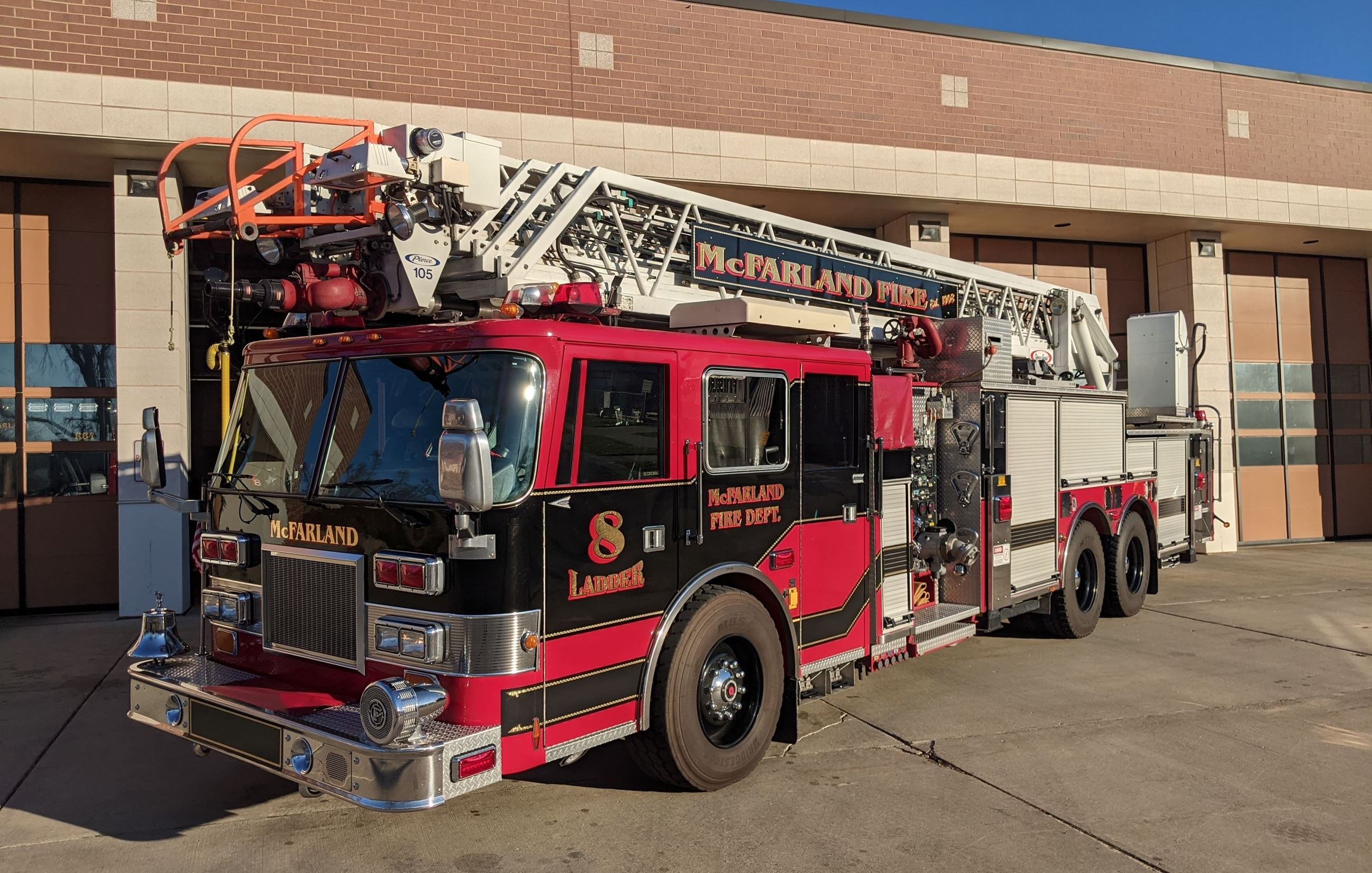 In addition to the ladder it's known for, which contains a pre-pied waterway, this vehicle features:

It also has a six-person cab with 4 positions for self-contained breathing apparatuses (SCBA) and can store additional SCBA bottles over the rear wheels. 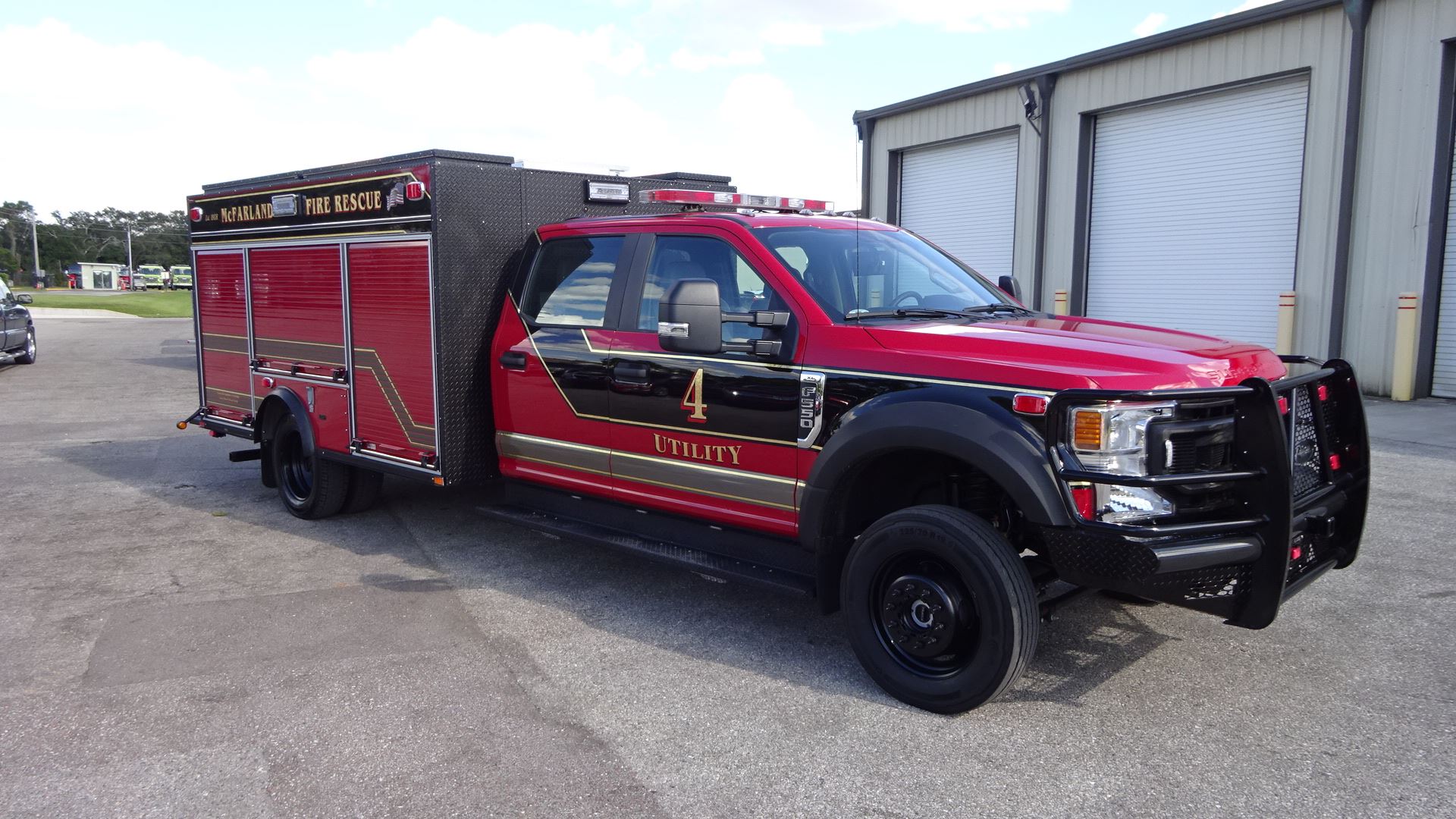 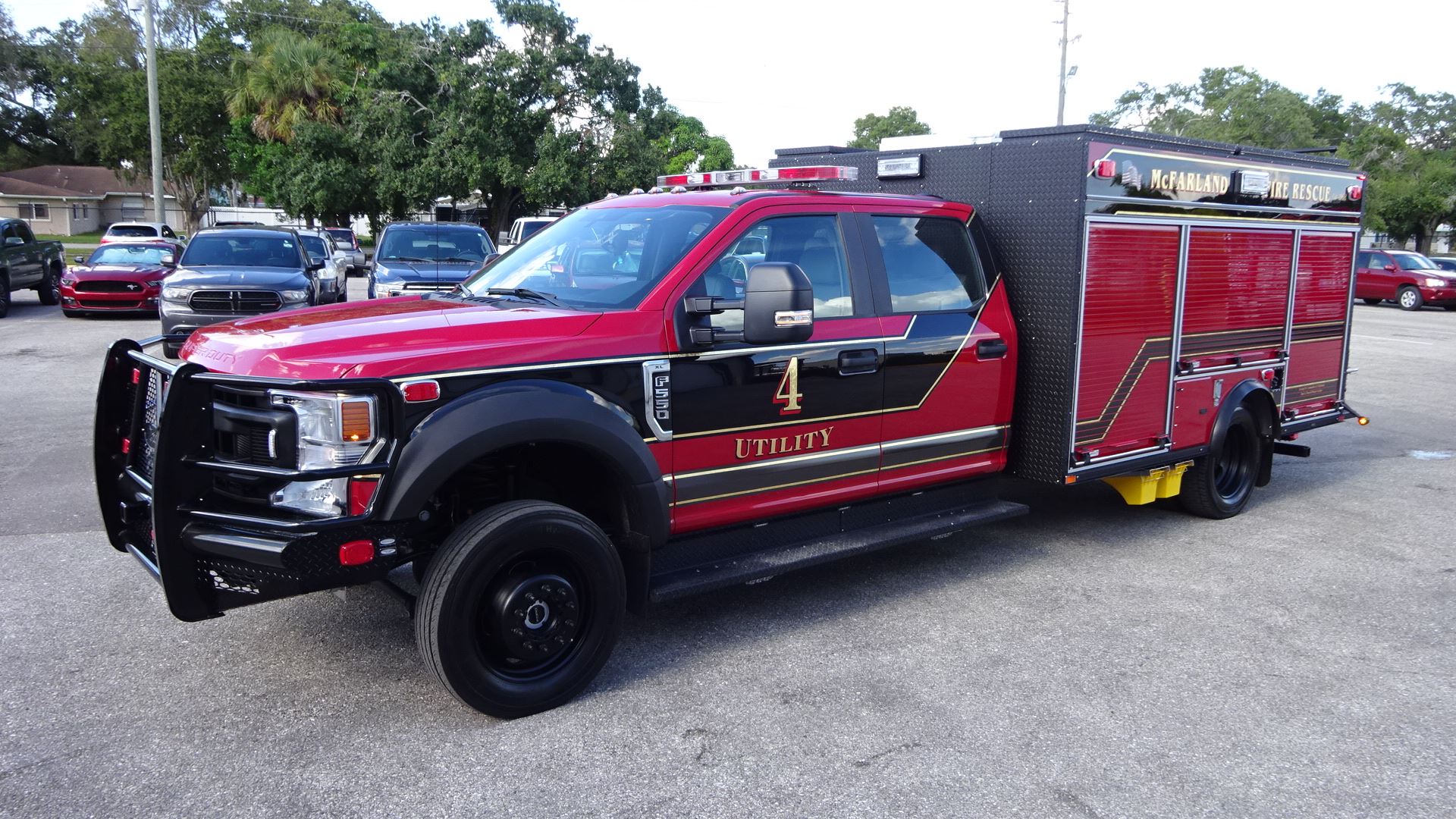 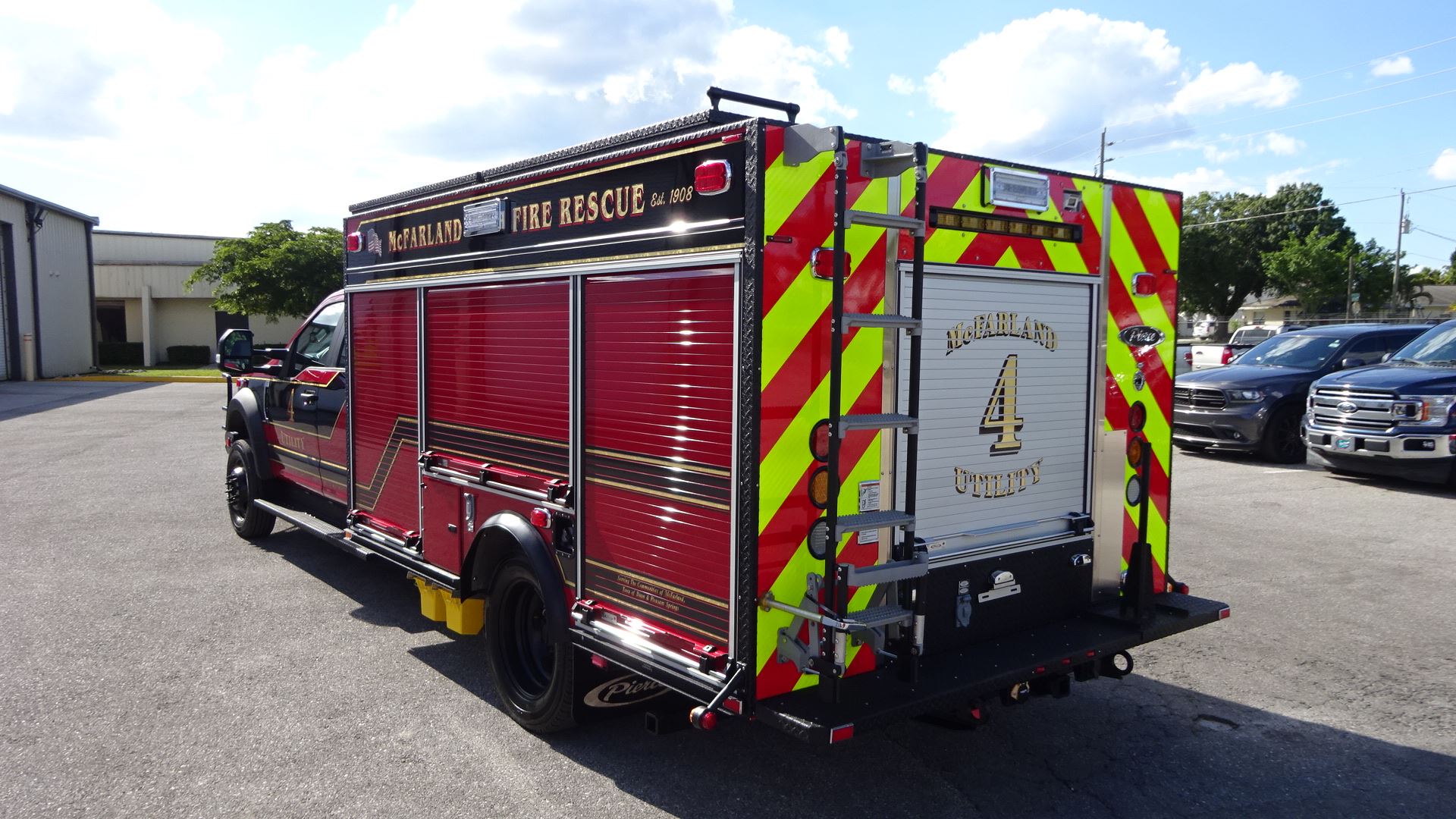 Tender 6 is a 2014 Freightliner that's primary purpose is to provide water to scenes where a water source, such as a fire hydrant, is not readily available such as brush fires. It also aids in traffic incidents by blocking the road and keeping responders safe. 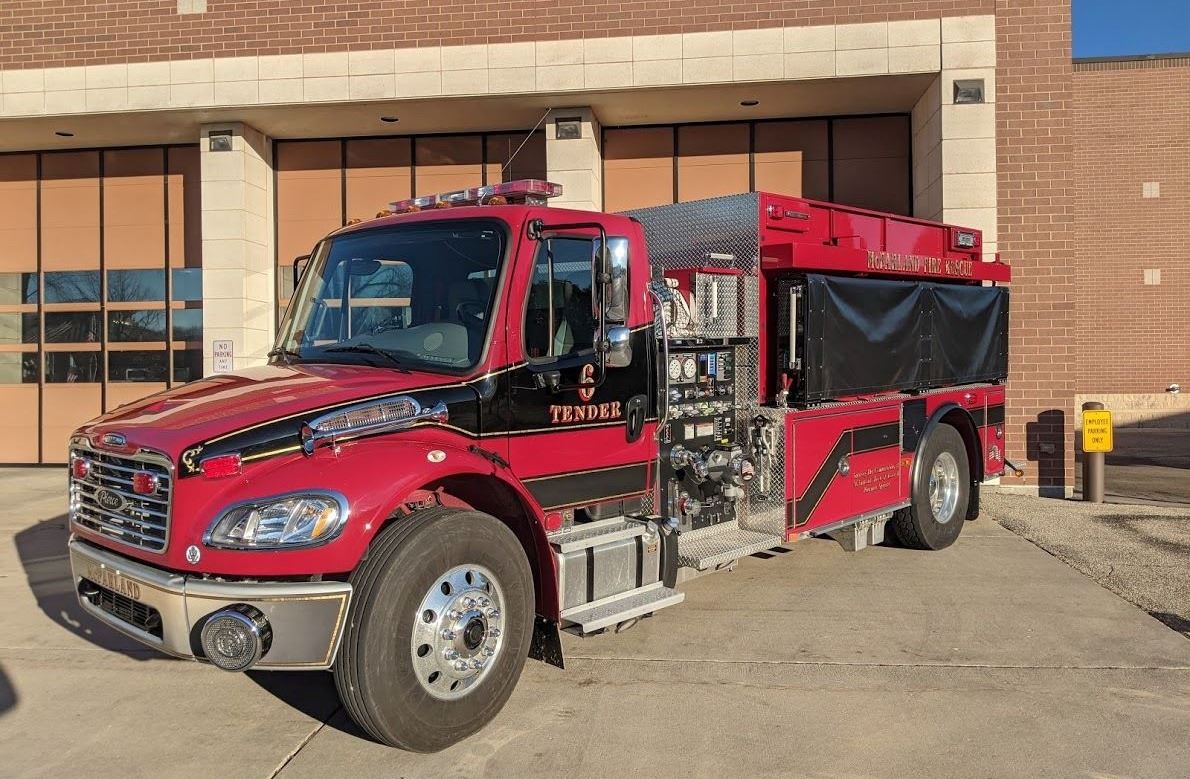 Watercraft 10 is a 19.5-foot-long Crestliner with a 190 horsepower Evinrude motor that was purchased from the Dane County Sheriffs.

This craft is typically deployed within 5 minutes of being dispatched despite being stored on a trailer in the Fire and Rescue Department. Its primary role is to provide water rescues and patrols on Lake Waubesa, Lake Kegonsa, and Upper Mud Lake; Lower Mud Lake is not accessible with Watercraft 10. 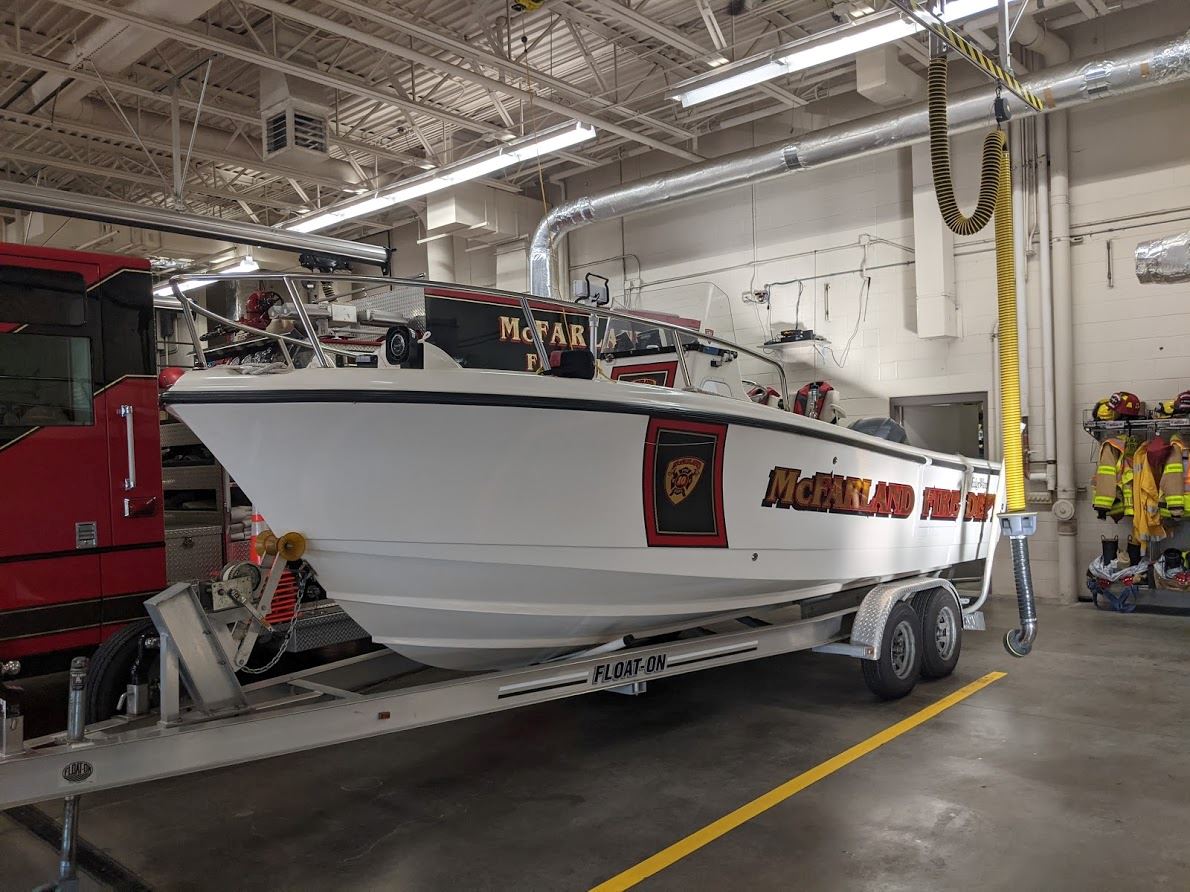